I wanted to share a few updates as you make your weekend plans because there’s no better way to have a good weekend than to be well-informed of the current security situation.

Various groups have called for a rally on Saturday, September 7th, to mark 40 days since the assassination of Mr. Mohamed Brahmi.  As with previous similar significant dates, many groups are claiming that it will be a decisive day and extra security precaution is advised. 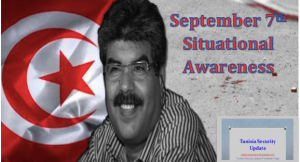 As always the places to be extra vigilant are:  Downtown Tunis, Bardo, Kasbah, government buildings to include police stations and Ennahda party offices. Also note that there will be similar rallies all throughout the country supporting this occasion.

Situational awareness is not about being paranoid, it’s about being aware of your your surroundings and engaged with your activities.

Additionally, It is important that you remain aware that certain events have the potential to significantly alter the security situation in Tunisia.

That’s it from my side…as always thank you for your feedback…and let’s keep sharing practical & relevant security information.  Feel free to join the discussion on Facebook as last week over 1,000 visitors made their way over to the Tunisia Security Update Facebook Page.

Have a safe weekend.