I wanted to provide some analysis on the recent State Department travel warnings and more importantly shed some light on how we as Expats can use their general advise to improve our security setup.

While a review of the recent updates are alarming, we can learn a lot from them.

Tunisia:  “The security situation in Tunisia remains unpredictable. Sporadic episodes of civil unrest have occurred throughout the country. U.S. citizens should avoid large crowds and demonstrations as even demonstrations that are intended to be peaceful can become violent and unpredictable. U.S. citizens should be alert and aware of their surroundings and maintain security awareness at all times, and should regularly monitor the local news media for current news and information.”

Mali:  “On January 18, the Department of State ordered the departure of all dependent family members who are not employed at the U.S. Embassy in Bamako, Mali, for a period of up to 30 days.”

Algeria:  “On January 19, 2013, the Department of State authorized the departure from Algiers for eligible family members following the attack on the In Amenas BP Oil facility on January 16, 2013 and subsequent, credible threats of the kidnapping of western nationals.”

Libya:  “On September 12, the Department of State ordered the departure of all non-emergency U.S. government personnel from Libya following the attack on the U.S. diplomatic mission in Benghazi. The security situation in Libya remains unpredictable.”

Morocco:  “The potential for terrorist violence against U.S. interests and citizens remains high in Morocco. Moroccan authorities continue to disrupt groups seeking to attack U.S. or Western-affiliated and Moroccan government targets, arresting numerous individuals associated with international terrorist groups. With indications that such groups still seek to carry out attacks in Morocco.” 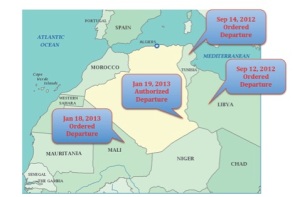 A Region in Flux

It’s difficult for someone without a “security background” to take all the information that’s out there (travel warnings, in-depth analysis, open source intelligence  etc.) and turn it into something practical that will actually improve their personal security setup.

The latest State Department travel warning for Tunisia, included some helpful tips that every Expat can benefit from.

Info:  “U.S. citizens remaining in Tunisia should use extreme caution and avoid demonstrations, make their own contingency emergency plans…”

Expat:  Avoid demonstrations.  Know when & where they are going to take place.  The big ones are usually announce well in advanced.

“Make their own contingency emergency plans…”  I received a lot of emails on this issue.  Simply put,  you need to make sure:  (a)  Your residence is safe & secure and you’re comfortable spending 3-7 days there without any support. and (b) You’re prepared to travel on short notice.

Of course there is a lot information available on family contingency emergency planning, but a “security mindset” is better than any lengthy plan.

Developing a security mindset is all about taking a proactive approach to your security setup.  This means staying informed & connected at all times.  Informed with practical & relevant security information and connected to a strong core group of friends, neighbors, colleagues and contacts that you can rely on during challenging situations.

Empowering expats to accomplish this is both our mission & passion.  Let’s keep the conversation going.

From Multinationals to NGOs, travelers and Expats  my goal is to deliver EMPOWERING Security Information.