September was one heck of a month…and the interesting part was that it was supposed to be the “quiet month” before the storm.  October was already expected to be a more challenging month and most security coordinators focused their preparedness plans around the mysterious October 23rd date.

What exactly happens on October 23rd?  Well it depends who you ask…

According to Presient Marzouki:  ““The National Constituent Assembly is the only legitimate authority because it is elected by the people. If it decides to extend its term for six months, no force can prevent it,”

Prime Minster Hamadi Jebali :  “We need to get over the boogey-man of October 23,” he said. Jebali considered such claims to his government’s illegitimacy after October 23 as dangerous for the stability of the country and threatening all of the efforts made during the revolution.”

Here’s the core of the problem…explained to me by a confidential source:

“In April 2012 the NCA (National Constituent Assembly…voted in on 23 October 2011) was given a further 6 month period to 23 October 2012 to complete the constitution and prepare for elections.

However following almost a year of constant turmoil Tunisia is still without a constitution. Many legal experts specializing in constitutional law as well a significant opposition figures have recently raised the important issue of the continued legitimacy of the NCA and the interim government after the 23 October deadline. Decree no 1086 dated 3 August 2011 signed by the then interim Prime Minister Foued Mebazza clearly states that the constitution must be completed within one year from the date of the election. The Ennahda led NCA and interim government however refute the legitimacy of this decree and the 23 October deadline and have vowed to continue governing the country.”

So while the current government states that October 23rd is not a deadline and things well continue as usual…we know that there are many groups who do not agree with this assessment.  Additionally, the events of September 14, really called into question the current government’s ability to maintain law & order.

As Expats we must remember to improvise…adapt…and overcome.  October can be 31 days of mystery & anxiety or another interesting month overseas…the choice is ours.

However, while we can choose to stay informed, alert, and prepared…we know that it is up to the Tunisian government and the Tunisian people to step up and learn from the failures we witnessed on September 14th…without their support and goodwill…things can get very ugly. 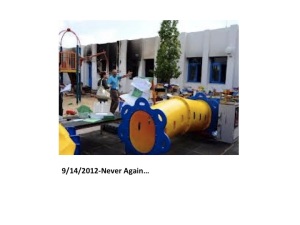 One thought on “TS Update-(October-A Challenging Month Ahead)”